Game warden Brent Tucker had offered to lead us to my mesquite tree. I needed to stand next to it as a survivor. I also wanted to pay homage to it.

I no longer thought of the Chihuahuan Desert as my sanctuary. But I didn't want to stop visiting a place that once evoked happiness. Best to return quickly and redefine its role in my life.

As our pickup bumped over the gravel road to the park's interior, I stared out the window and felt only trepidation.

When we arrived at the bunkhouse, a woman who worked in the kitchen joined me for a glass of iced tea.

"You're the woman who was lost," she said. It wasn't a question.

"It must feel really special, to know that you survived something like that," she said. "In its own way, the desert protected you. It gave you its cactus. It gave you the spring. And then it gave you the tree. You see that, don't you?

It took care of you."

I still felt conflicted when we headed out the next morning. The cold had stripped the mesquite trees of their foliage.

After 1 1/2 hours of hiking, Tucker stopped and checked his GPS. "It's in this area," he said, climbing higher to get a better vantage point.

Rick looked for familiar rock formations along the ravine.

As they searched, I was drawn to a mesquite tree 10 yards away. Its limbs were nearly bare, but I recognized the rock and hollow underneath it. I had wedged myself into that narrow hole when the sun's heat grew too intense. Tucker had perched on that rock while giving me capfuls of water.

I sat down beside the tree and looked up. There was the rock formation with three chimneys of equal height and a fourth that was a little taller. I crawled to the other side of the tree, where I had crouched as I told Rick to leave me. I curled around its trunk, remembering how it felt to watch him go, to know that I might die alone.

I broke off several small branches — keepsakes for my children and me from the place where I had nearly died.

Rick and Tucker looked for my wedding ring for nearly an hour with no luck. Thirteen years ago, Rick put that ring on my finger in this desert. Someday, he says, we'll return and look again.

Part of me, though, thinks of the ring as a sacrifice.

The desert nearly killed me, but it also protected me.

It was here, under this mesquite tree, that I put every bit of trust I possess in God and my husband.

Love and faith brought me out of this desert.

Love and faith brought me home. 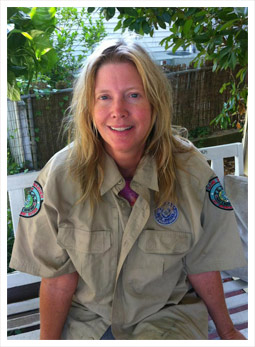 Special to the Arkansas Democrat-Gazette/MARY FRYE
Cathy Frye's mother, Mary, took this photo the day after Cathy returned home. She is wearing one of the Texas game warden uniform shirts used to cover her in the desert.